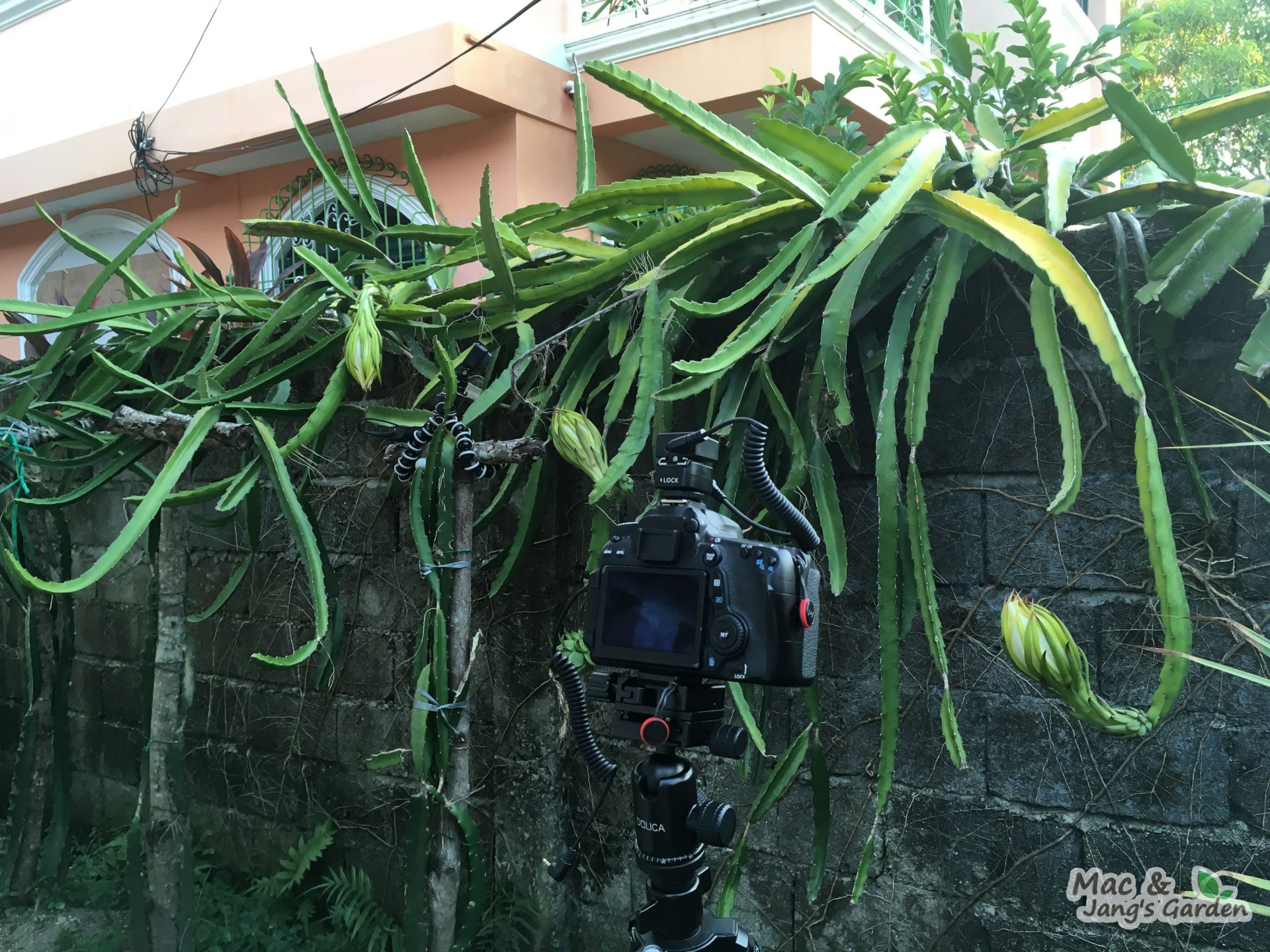 We have a huge pitaya plant sprawled over a west facing wall. Every summer, around May, we have front row seats to its huge, showy and fragrant blooms. By June the flowers turn into ripe pitaya fruit (dragon fruit) with red skin and red flesh.

These plants are amazing. They thrive in neglect and rewards you with fruits for simply not minding them.

Every year since 2016 I’ve been making time-lapse video of the pitaya flowers opening. The video below is the result of my efforts back in 2016.

I’ve only had a handful of time-lapse video at this point and it shows in the video. There are also a number of limiting factors that affects the quality of the video. My camera is setup outdoors where it is susceptible to rain or even theft. I have to stay up all night to make sure my time-lapse setup is safe. Another limiting factor is the battery in my camera. During day time the exposures are short and the camera is able to take continuous shots for over twelve hours. But during the night the camera needs to take long exposures and that drains the battery fast.

In the summer of 2017 I’m more knowledgable and more experienced in making time-lapses. I had two setups for that year. One taken with my trusty Canon 70D and the other with a GoPro Hero 5.

The time-lapse video above is taken with a Canon 70D. The whole time-lapse is around six hours. The shot was limited by the camera’s battery as I set the camera to take long exposures so I can keep the ISO, and noise, low. It also resulted in more natural night time look.

The video above is the time-lapse taken with a GoPro Hero 5. The time-lapse ran for over twelve hours and captured how the the flower started to unravel close to 8PM, peaked around midnight and started to wilt around 3AM. This video proved to be most valuable in my next attempt.

For this year’s pitaya flowering time-lapse I decided to start the time-lapse at 7PM and run it until 7AM. To work around the battery capacity I set the ISO high to keep the exposure short and I will just clean the noise during post. I ran a test and it showed that my 64G SD card doesn’t have enough room for 3,000 RAW files so I set the camera to take sRAW.

I thought I can do some more trial runs before the bud I’m filming blooms but that is not the case. The bud showed signs that it will bloom the following night so I hastily set it up and hoped for the best.

The resulting time-lapse is much better than my previous efforts. The only other problem I encountered was the night-to-day transition. The pictures from 5AM onwards are overexposed and unusable. To fix this I need to set the camera to bulb mode and my intervalometer to bulb ramping. This requires testing of course. I still have plenty of chances to take the best looking time-lapse this year.? Wish me luck!