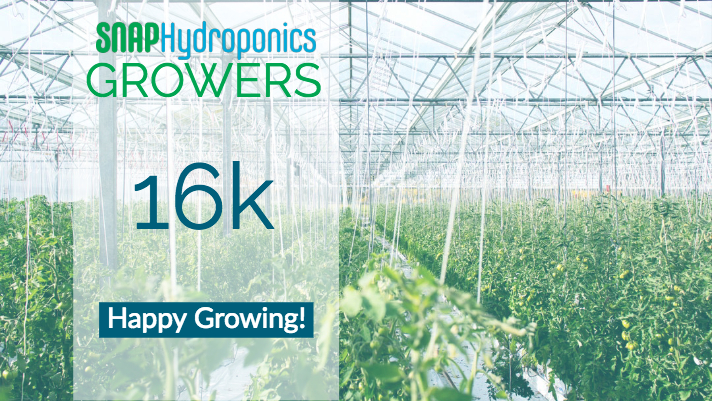 To celebrate this milestone I would like to invite my fellow growers to write a testimonial about SNAP Hydroponics. It doesn’t have to be as lengthy as mine (written below) but if you can why not? Please contact me if you want to write a blog post. It’s a nice way to put your name out, showcase your passion, skills and/or expertise.

I’ve been a gardening enthusiast since I was little. Me and my siblings were left to the care of our lola. She’s a farmer. She maintains a small farm where she grows different crops like cassava, ube, gabi, upo, sigarilyas, patani, malunggay, kamote, banana, langka, dalungyan, atbp. When I was little our lola always takes us to her farm so she can keep an eye on us.

That’s when I got started in gardening and that’s when I first experienced the joy of eating home-grown and home-cooked food. My fondest memory of my lola’s cooking is ginataang talbos ng balinghoy na may sardinas (young cassava leaves and sardines in coconut milk). With sardines if we are lucky. Everything in that recipe came from the small farm. It’s an amazing experience that I longed to experience again. Gardening and growing my own food has always been something I’m very passionate about thanks to lola.

Growing your own food can be difficult. I know because I’ve seen my lola do it. Even though I’ve been gardening and growing my food all my life growing my own fruits and vegetables has always been a challenge because my gardening space has always been limited and I’m always at the mercy of pests and diseases. All that changed when I discovered SNAP Hydroponics.

Because I have limited space in the places I lived I’ve always considered building a hydroponics system. However, according to my research hydroponics is not cheap to build nor is it easy to maintain. When I queried for “beginner hydroponics Philippines” back in May 2016, SNAP is the only relevant result and in succeeding queries I stumbled upon the SNAP Hydroponics video which I’m sure most of you are familiar with. It took me another couple of months of research because I’m pretty skeptical about it. Growing plants and hydroponics shouldn’t be as easy as the video demonstrated. Nonetheless, by late July I’m running my very own SNAP Hydroponics system.

My satisfaction with the results? Extremely satisfied and it made me very happy. I can hardly believe it worked so well the first time by simply following the step-by-step instructions (and being patient). From then I knew it SNAP has a lot of potential. Right from the start I knew it is something I need to read more about? and something the rest of the nation should know about. You can read the rest of the story here.

And now we are here with more than 16,000 members. The rest of nation is still curious. I hope all of us continue to spread the word about SNAP Hydroponics. Maraming salamat po! Good luck and happy growing!

I’m an “experimental gardener.” I really don’t have any particular goal when it comes to gardening. I just grow plants because it’s fun and rewarding. When I stumbled upon SNAP on the internet I got curious and decided to try it out. My curiosity lead me to a community I never thought of creating.

Back in 2016 we moved to a house which has more place for me to do gardening. In addition, it has a disused basement (silong) which I thought was perfect for indoor hydroponics gardening. I started reading about hydroponics and I learned that hydroponics:

As I searched Google on how to make hydroponics work on my environment and experience level (“hydroponics philippines beginner”) one result keeps popping up—SNAP Hydroponics. As I read more about it the more I learn that there is very little information about SNAP online. Nonetheless, with minimal knowledge about it, I decided to buy a set of solution and try it out. My very first grow in the summer of 2016 is a success and so is my second try during the rainy season of the same year. It was then I decided to record and share my experience with SNAP on the internet.

The goal at the time was to spread the right words about SNAP hydroponics.

I created SNAP Hydroponics Growers on the 30th of September 2016 with my wife as the only other member. I never even thought of adding my friends because I don’t believe any of them are into gardening. And so for the first few months. There are very little activity in the group. I’m very thankful for the first few members who joined though there’s very little content or activity going on in the group. However, in these first few months I learned a couple things and set a few simple rules to run the group.

Though member requests are few and far between during to first few months I make it a point to review each request to make sure they aren’t there to spam. I allowed everyone to post without requiring admin approval and it worked somehow. We reached one thousand members on August of 2017, short of a year after the group was created.

Many things changed when the group reached one thousand members . There are more activity in the group and membership requests has grown. It’s also around this time when the most knowledgable horticulturists in the group joined thus increasing the amount of knowledge being exchanged in the group. Shortly after that, I created this website as a repository of information about SNAP hydroponics. Not long after, in December of 2017 SNAP Hydroponics Growers reached two thousand members.

At this point, members are discussing many other aspects of gardening outside SNAP Hydroponics so I changed the rules to include horticulture topics and changed the group type from “club” to “support.” The growth of the group continued rapidly and in just another month it reached 3,000 members.

When we reached 5,000 members Facebook restricted me from freely changing the groups privacy setting and group type. The good news is Facebook gave me more features to manage to group. I can now have multiple announcements instead of a single pinned post and I get to set a list of rules that is visible in the groups “about.”

The growth of the group continued. I grew so fast that I didn’t fail to make milestone posts for 6,000 and 8,000-member milestones.

Past ten thousand members, I finally decided to require admin approval for member posts to deal with spam. By 12,000 members I added a moderator to help me moderate the group. At the same time I reworked this website and moved it to a better content platform. You can still access the old version of snaphydroponics.info should you wish to do so.

Shortly after the group reached 12,000 members I checked and realised that the group has attained one of the goals I set for it back in 2016 to reach the top of search results for “SNAP Hydroponics.” Back when I first started using SNAP. Finding information about it is very difficult and unreliable. There are even search results that will lead you to illegitimate products claiming to be SNAP hydroponics solutions. I’m glad to report that that is no longer the case today. Searching Google and Facebook for “SNAP hydroponics” now leads you to reliable and trustworthy answers about SNAP hydroponics thanks in part to SNAP Hydroponics Growers.