Replenishment of the SNAP working solution inside the grow box is an important part of maintaining the SNAP Hydroponics system. The amount of working solution inside the grow box will decrease overtime as the solution gets depleted through evaporation and transpiration. In addition, the concentration of nutrients in the solution will decrease as the plants consume them to power their growth.

To survive being water logged, the plants grow aerial roots. These are roots that are not totally submerged in water and are exposed to the moist air within the grow box.

As the plants develop further, more of the solution will be consumed. It is important to regularly check the working solution level and never let it dry up.

That’s it! If you have any questions please feel free to leave a comment below. Happy growing! 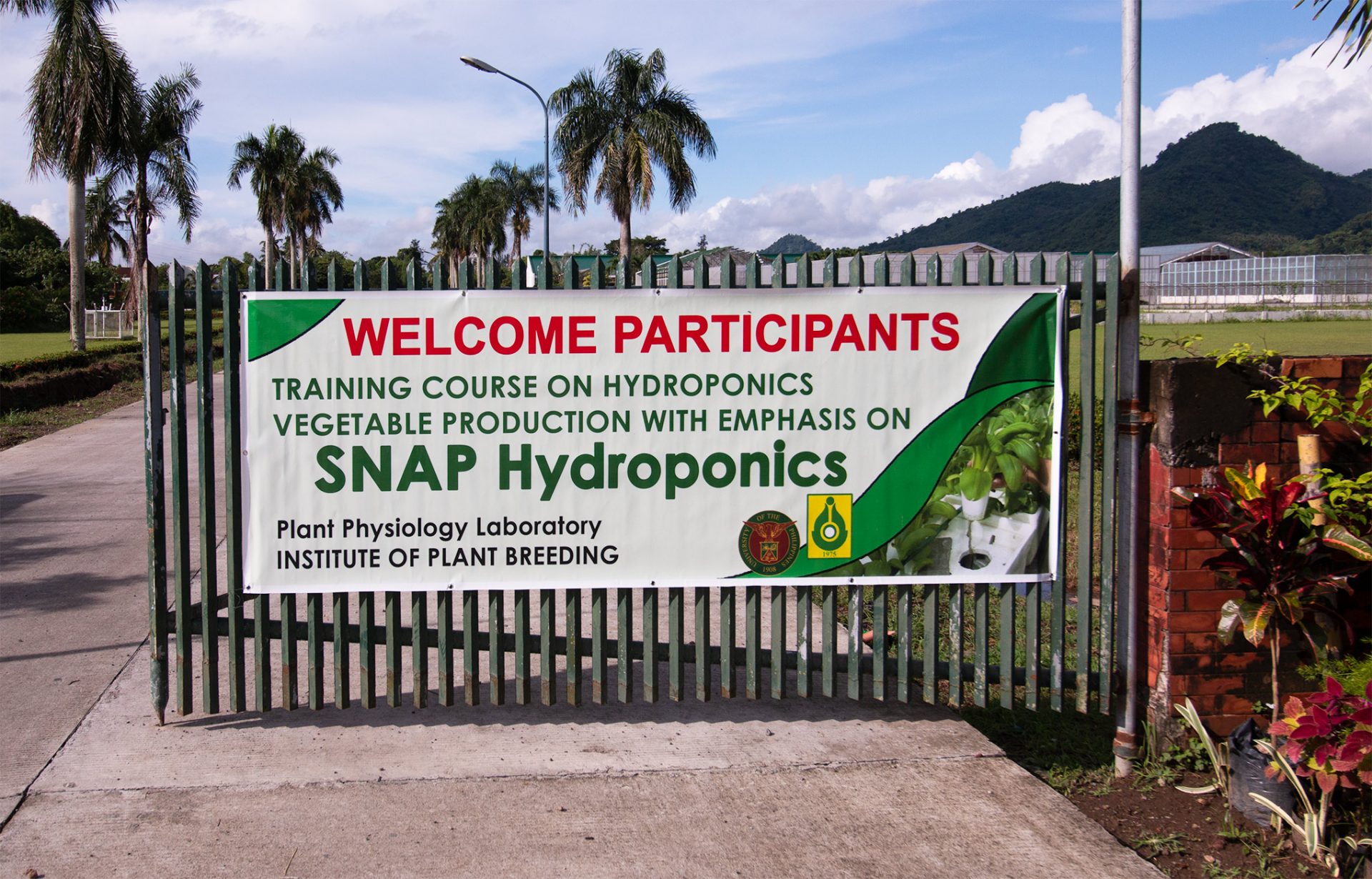 Completing the short training course on hydroponics vegetable production with emphasis on SNAP Hydroponics is one of the requirements for being an authorised reseller of SNAP Hydroponics nutrient solutions. The training course is conducted in Plant Physiology Laboratory in UPLB Institute of Plant Breeding. This guide will show you how to get there if you are interested on being trained on hydroponics vegetable production for your hobby or business.

Where is the UPLB Institute of Plant Breeding (IPB)?

It is far from the UPLB campus and is a little challenging to get to. Do not despair because there is a shuttle that ferries people from UPLB to UPLB-IPB.

I’m commuting. How Do I Get There?

It’s easy to commute to UPLB. Get there before 7:30AM. If you are too early you can spend your time in the fast food chains around the area. Ask the guards for directions to the admin building parking lot. It’s not very far. If you are facing the gate it’s the very first building to your left. Remember to obey traffic rules. Smoking and littering are prohibited inside the campus.

The easiest commute route is commuting to UPLB campus and riding the free shuttle service that ferries staff and student from the UPLB campus to UPLB-IPB.

The shuttle service is free for everyone. If you are there by 7:30 AM queues should start forming. Be sure to ask which shuttle the queue is for before you queue. Because you might be queuing for the wrong one.

The shuttle can get pretty crowded. You might need to give up your seat to someone who needs it more than you. Please be considerate.

When the bus stops, get off and take the path immediately facing the bus door. Follow it to the Physiology Lab.

I have my own vehicle. How do I get there?

You can use navigation apps. You can also try and tail the UPLB-IPB shuttle when it leaves for it’s 7:45AM trip as I described above. Just make sure to ask the shuttle’s driver if it is OK.

Yes, SNAP is generally recognized as safe or GRAS. Before I continue I want to affirm that I am not involved in the development, manufacture and sale of SNAP Hydroponic nutrients. The words you read on this blog are the words of a SNAP enthusiast.

SNAP is generally recognized as safe (GRAS). I didn’t make that up. It’s a technical jargon that is used in industry and academia. What makes SNAP GRAS? Because it is self-affirmed. Why? Because:

Many has reaped the benefits of this government funded project. SNAP Hydroponics? goal of popularising hydroponics and urban food production has made livelihoods for many.

Personally, I find SNAP safe because it doesn’t have soil and how very minimal the food is handled before it reaches your door step. In hydroponics, the nutrient solution only has essential nutrients the plants need to grow. In soil, the nutrients are in the soil along with other stuff that gets in the soil. If you are unlucky the soil could be contaminated with hazardous run offs or with E. coli. The same goes for handling the produce. The greater the number of times the produce exchanged hand the greater the risk of contamination and the more unappealing it seems. I believe the only true way to enjoy clean and fresh food is to grow them yourselves in an environment you can control.

“SNAP is not organic.” is what I always answer when this question is posted in SNAP Hydroponics Growers (SHG). Being “organic” is such a polarizing property it seems. People literally leave the group whenever that discussion is brought out. What is it about being “organic” or having the “organic” label that seems to be so important. In food production what does it mean to be organic?

A long time ago the human population is low. They are hunter gatherers. The population is kept in check by the outcomes of the hunt and gathers. Because of this everybody is required to hunt and to gather for the survival of the group. One day, the gatherers noticed that plants grew out of the seed they toss.

Eventually, they learned that if they keep cultivating the best plant and toss the bad ones they make better plants. This is how domesticated plants happened. A large percentage of the plants we eat are modified varieties of their “wild” counter part.

This is how agriculture started. Because of agriculture the population spiked. People started to settle down to form civilizations. The increase in population means farmers need to increase their yield by researching new techniques and ideas.

Fortunately for them people aren’t tied to hunting and gathering anymore. There is enough food that some people do other things like crafts, arts and more importantly science. We got better and better at farming and the population grew bigger and bigger still. We learned techniques like cycling crops, using compost to fertilize the soil and we control pests through biological means and utilizing plants and animals and the most sustainable way. Like feeding grazing animals plant material from the fields and using the manure of the grazing animals to fertilize the fields for better crops. That’s what I imagine people would think about when they say a food was grown through organic means and is thus organic food. I like this method. It is sustainable and nature friendly. But why didn’t it just stay that way?

Because of the population. It is growing so fast that agriculturists need even faster methods growing plants and increasing yields. Agriculturists figured out that plants doesn’t really need compost or manure to grow faster it doesn’t even need soil. All they need are essential chemicals dissolved in water (and carbon dioxide and light of course) that are provided by the soil and which can be amended by adding manure or compost. Manure and compost are rich in these essential chemicals and are one of man kinds first fertilizer.

Because we can now manufacture these nutrients essential to plant growth we have chemical fertilisers. Because we have such good result with it we tend to overdo it and in the process we pollute our soil and water. Our excesses gets the best of us.

I mentioned earlier that plants only needs essential nutrients, carbon dioxide and light to grow which is why we have hydroponics. A method of growing plants in nutrient solution with out the use of soil.

“But you still haven’t answered what it means to have an organic label”, you might ask. I’ll use the definition in Republic Act No. 10068 or the Organic Agriculture Act of 2010:

Organic refers to the particular farming and processing system, described in the standards and not in the classical chemical sense. The term “organic” is synonymous in other languages to “biological” or “ecological”. It is also a labeling term that denotes products considered organic based on the Philippine National Standards for organic agriculture.

This means that by law the term organic is a label for produce that the Philippine Standards for organic agriculture deemed fit to carry the “organic” label. This mean most of the produce you commonly see on the market is not organic. It is also against the law to label produce as organic when it’s not.

So that settles it. By Philippine law SNAP Hydroponics is not an organic food production method. But even it that is the case, hydroponics is still one of the most efficient and eco-friendly method of food production. Perhaps one day our standards will change and we will be allowed to label SNAP hydroponics produce as organic.